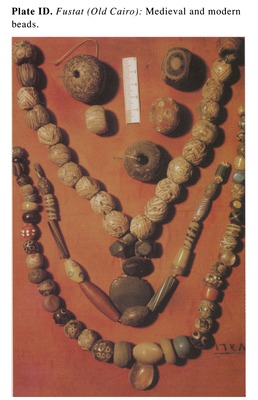 Fustat (Old Cairo): Medieval and modern beads donated to the Islamic Museum, Cairo, around 1920 by Fouad, the penultimate monarch of Egypt and father of Farouk. The large bead at the upper left is stone; the other beads at the top are medieval glass. The first strand is of Fustat Fused Rod beads, with green jasper cornerless cubes and a heart pendant in the center. The second strand is composed mostly of Venetian lamp beads, but the mosaic beads are Early Islamic. The third strand is mostly Early Islamic, but the translucent red beads are Venetian.

Beads of the Early Islamic Period